X
Skip to content
FREE SHIPPING ON ALL SMRTFT NÜOBELL DUMBBELLS
Due to significant order volumes, shipping times may be longer than displayed
Quick view

NÜOBELL give you the convenience of all-in-one adjustable 5-80lb dumbbells that are easy to use and have superior durability thanks to its machined steel weight plates. This innovative dumbbell set will quickly become your go to favorites.

New Upgrade for the Matte Black Nuobells: The cradles and handlebar have been upgraded to aluminum. This decreases the possibility of rust in humid conditions, such as outdoor use. Go into the unknown and uncomfortable with SMRTFT. You are the only limit to your success.

The material is steel, aluminum and plastic
Net weight: 80lb

High quality, excellent design. Love these. Well worth it. You won't be sorry if you buy these.

The ease and speed of changing the weight / adjusting these dumbells combined with the form factor makes them hands down the best set of adjustable dumbells out there. I've had another brand of adjustable dumbells for the past five years and while they do the job, they are clunky, are a struggle to hold for certain exercises and take several, tiring steps to make increments of 5lbs. Nuobell handles and form factor feel like regular dumbells.

Love the look, feel, and craftsmanship of this product. Wanted an adjustable weight that was at least 80lbs and not an awkward shape. Couldn’t be happier with this purchase. Incredibly fast shipping. Received in about 5 days. 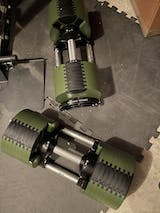 Our stands have been designed to make your workout even better. The stands are the best on the market for our adjustable dumbbells, both 50 lb and 80 lb sets. Every time you pick up and set down your weights, you could be placing down as much as 160 pounds, and our stands can withstand that weight time after time. The heavy duty stand has the largest frame of the stands we sell. We design the stand to be at the perfect height for you to not have to put improper strain on your lower back. The stand also has rubber feet that do not scratch or mark your floors.

Just received and put this stand together. Overall feels super sturdy. Installation was easy enough. I have the 80lb nuobells and I definitely have confidence in the stand doing its job. Only issue I had was the logo was dented and chipped out of the box. Seems silly but for the ocd type this could be annoying. 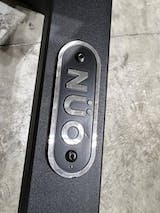 When I had bought this item, I was informed that it was a Pre-Order and that it may take up to 1 week to be shipped out. I was okay with this, just so long as I get my dumbbells on time.

Sadly, when I opened up the packaging, it became clear to me that the reason I got the stand earlier than expected was because it seemed to have been rushed through production - One of the pieces was not fully put together (luckily a quick fix), and the Nuo logo appears to have been placed upside down which was pretty disappointing.

Edit - Since writing this, I was reached out to by SMRTFT Customer Service and they were more than happy to resolve the issue. They sent me a replacement for the middle piece free of charge so the logo is now facing the right direction. Super satisfied with that - Helped with my OCD.

Aside from that, the stand is awesome. If you plan on buying the weights, I would definitely get the stand as well. Can't imagine not having it. If you run into the issue I have, I'd definitely reach out to Customer Service. They're great. 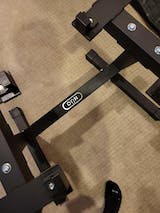 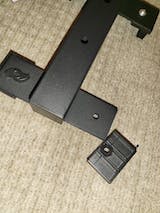 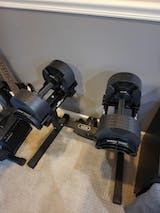 The stand isn't required and you can live a long, happy life without it - but it's so great to have. Keeping the DBs off the ground right around pickup height is just really handy. Set up is quick and easy and the stand is very solid - I have zero concerns. This is a fantastic product to compliment your adjustable DBs.

M
Mark.
Must Have.

I should have purchased this stand, when I ordered the dumbbells. Two 80lb dumbbells held as secure as you would like and more. Nicely made. Very solid and easy to put together. No misaligned holes. Absolutely love this gear. When you guys going to a barbell on the same lines? (Olympic with please!)

Our stands have been designed to make your workout even better. The stands are the best on the market for our adjustable dumbbells, both 50 lb and 80 lb sets. Every time you pick up and set down your weights, you could be placing down as much as 160 pounds, and our stands can withstand that weight time after time. The high performance stand has a compact design to fit into smaller spaces while still withstanding 160 lbs of weight. We design the stand to be at the perfect height for you to not have to put improper strain on your lower back. The stand also has rubber feet that do not scratch or mark your floors.

Great Rack! Strong and Sturdy and Looks Great in My Gym! 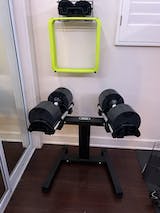 I bought the Nuo Bells and used them in our home gym for about 6 months. One day, I had enough of pulling them off the ground and came to my computer and put an order in for my stand. I am so happy with the stand!!! Sounds silly but not having to pull 70 or 80 pounds off the ground each time is a game changer. I am using my Nuo Bells much more now becasue of this very sturdy and nice stand...makes the whole garage gym look better honestly.

Easy assembly and does its job.